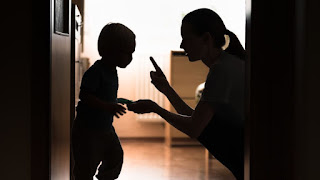 Parenting is a difficult task, and while we want the best for our children, none of us are void of error. Sometimes, no matter how good our intentions may be, we still cause harm to our children, but thankfully knowledge can be a powerful tool to help us to strive to be better.

While some of the following things may seem odd, read them through because I promise each item listed has to merit. Children are still in their development phases and because of that, things that we may deem as harmless can leave a lasting mark on them, inside and out. Don’t beat yourself up if you’ve done any of the following list items. We all make mistakes, but understanding the mistake can help you to avoid them in the future.

1. Putting toys in their baby’s bed.

While it may be tempting to place your little one’s favorite toys in their baby bed, it’s best not to. The reason being is that they may end up placing their face on the toy during their sleep, which could cause breathing issues.

Every parent will have a night, or course of nights, in which it’s difficult to get their child to sleep. In turn, rocking them can become vigorous, because you want to do whatever you can to get them to sleep, and it can also be frustrating. However, shaking them too hard, even on accident, can cause shaking baby syndrome.

We all want our children to be safe and free from harm, however, there is most definitely such a thing as too clean or too sterile. The reason behind this is that germs are necessary to build your child’s immune system. Without built immunity, they are more prone to asthma, skin rashes, and a host of other problems.

4. Forcing them to finish their plate.

Many of us were raised by parents or grandparents that would not let us leave the table without finishing our plate, no matter what our hunger cues were telling us. However, but forcing your child to eat when they aren’t hungry, you are teaching them how to overeat, which will inevitably give them a bad relationship with food. Additionally, they are likely to get sick eating more than they can stomach.

5. Comparing them to other children.

Comparing your child to anyone else is a bad idea. Not only does it cause them to doubt themselves, but it can also cause their self-esteem to plummet and create an inherent sense of feeling unworthy.

6. Not interacting with them enough.

Children need interaction from their parents and family to properly develop. Without the right amount of play and interaction, their development can become stunted. Additionally, it can lead to mental illness down the road.

Far too often in modern times, parents reach for the convenience of a phone or tablet to soothe their children while they tend to other things. However, the one who pays the price for this – the ultimate price, is the child. Screen time inhibits your child’s ability to socialize normally, and it also stunts their brain development and ruins their attention span.

While sharing is good, children, especially toddlers, are just beginning to learn their sense of what is theirs and also just learning to navigate throughout the world. It’s normal to not want your child to be greedy, but psychologists say that when you force them to share, you are raising them to be convenient. In turn, they learn that the desires of others are more important than their own.

When you reward talent, or gifts, rather than their effort, you teach your child that they are special and entitled to rewards, rather than earning them. In turn, they may be less likely to put forth effort in much of anything, but instead, expect you to shower them with gifts because they are naturally talented. Psychologists say this sends a bad message.

10. Teaching them to be extremely polite.

We all want our children to be polite, however, when you teach them to be polite to everyone, no matter what their feelings are, you are sending a bad message. A social experiment was done to study child abductions, and 15 out of 17 children walked away with people who intended to abduct them. Why? Because they wanted to be polite. Rather than focusing on politeness, it may be best to focus on showing them what is safe and what isn’t and allowing them to trust themselves and their feelings about others.